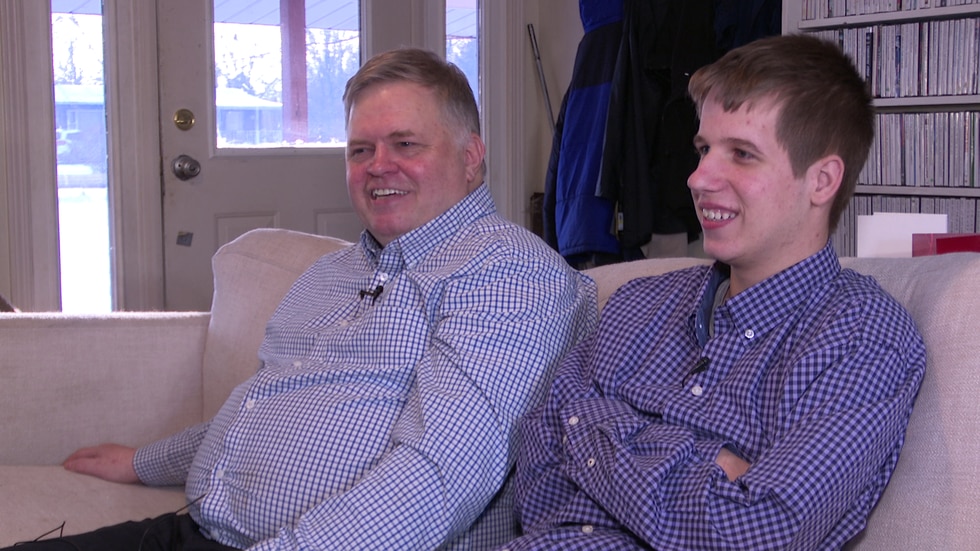 (WNDU) – There’s a race against time for children placed awaiting adoption. When they turn 18, they “age out” of the system. This means their services are drastically reduced and many are fending for themselves.

That’s why our Wednesday children’s segments are so important. And we’re so happy to report that they work! Six of the children who were featured in our Wednesday child segments were adopted. Many of these adoptions are a direct result of our stories.

Alex was born with fetal alcohol syndrome. It is a serious disease that can cause irreversible brain damage and even death. Alex survived. Parental rights were terminated and at age 5 Alex was an available adoptive child.

When Alex was interviewed for our Wednesday’s Child segment two years ago, he was afraid of aging out of the system without finding a family.

At the time, Alex was 16 and wanted to be adopted by someone who would “understand” him.

“Someone who really appreciates my flaws and all that,” Alex said at the time.

A year later, we did an update on Alex after completing a web page design internship.

Alex was still expecting a family and he said he was afraid he wouldn’t find any.

“I hope I will be adopted this year because this year is my last because I am 18,” Alex said.

This story aired in April last year. It was posted online, and soon it was all over social media.

“I watched one of your presentations. The one in May or April or whenever,” Andrew Sporner said.

“It was actually shared on Facebook. I saw the title and I was hooked.

A computer engineer, Andrew saw himself so much in the tech-savvy teenager he wanted to help.

“I looked at myself (and said) ‘Somebody has to do something!’ You know?” said Andrew.

“Well, you never know when this good family is going to watch these youngsters, so thank you,” Michelle Savieo said.

Savieo is Indiana’s adoption program manager. She says teens in foster care like Alex are at high risk of aging out of the system.

“What it means to age out of the system means that children leave foster care without any permanent relationship. Often this leads to homelessness, mental health issues and a whole host of challenges in the lives of these young people. Families can help fight this,” Savieo said.

Who can adopt a foster child?

As a single man in his 50s, Andrew never saw himself as a father.

“I thought the whole idea was pretty much nonsense, you know. My age. Single, you know. What do I have to do? said Andre.

“I started asking. (I) referred the idea to friends and everyone without exception said ‘do it,’” Andrew said.

And so, he did. Andrew even returned to Indiana to facilitate the process.

“It was supposed to be me coming back,” Andrew said.

Soon the two met and they just clicked.

“I never thought I could do it, but it seems pretty easy. Really. It’s just kind of worked it out. Maybe it’s chemistry or whatever. It all went well” said Andrew. “He’s a smart kid. There’s some little things he has to work on. You know. Being focused. Attention to detail. But when I was that age, I was the same. I was all over the map.

Seven months after meeting Alex and only three days before his 18th birthday, adoption day has finally arrived.

Due to the pandemic, it was held virtually and WNDU received special permission to be included in the hearing by Marshall County Circuit Court Judge Curtis Palmer.

“Mr. Sporner, if you would raise your right hand,” Judge Palmer said at the start of the proceedings.

Adoption attorney Grant Kirsh set to work from his office in Indianapolis.

“Andrew, how did you know Alex?” Kirsch said.

“Alex, if you could raise your right hand for me, please,” Judge Palmer continued.

“At school, what is your favorite subject?” Kirsh asked.

“What do you want to be when you grow up?” Kirsh asked.

“A business owner who owns a tech company,” Alex said.

“Translation for everyone,” Kirsh interjected. “Alex wants to be a billionaire!

With the trade issues settled, it was time to make a decision.

“All necessary consents have been obtained. I will find that adoption is in the best interests of the child, Alexander,” Judge Palmer said. “A child with special needs, justifying an agreement to help with the adoption of titles. And I’ll grant the adoption request.

WNDU was credited with helping Andrew and Alex make the connection.

“Ms. Sloma, if you’re actually the instigating part here, that brought these two together, I’m glad to see it worked out for everyone,” Judge Palmer said. wish a long and healthy happy life.”

Once the call ended, Andrew had a surprise waiting for Alex.

“So now there’s something on the table that we need to look at,” Andrew said.

“I don’t have to say ‘keeper’ anymore. I can say now, ‘father.’ It’s something in itself right there. I mean who would have thought,” Andrew said.

As for Alex? The road has been long.

Out of the system and into a place to call home.

How can you help foster children who need adoption? You can watch our Wednesday child segments and share them on social media. There is also a great need for more foster parents and foster parents willing to adopt. For starters, we have links on our website to the Indiana Adoption Program, the Michigan Adoption Resource Exchange, and Grant Me Hope.

“Student fathers are ghosts”: why fathers have a long chance of graduating from university | American education