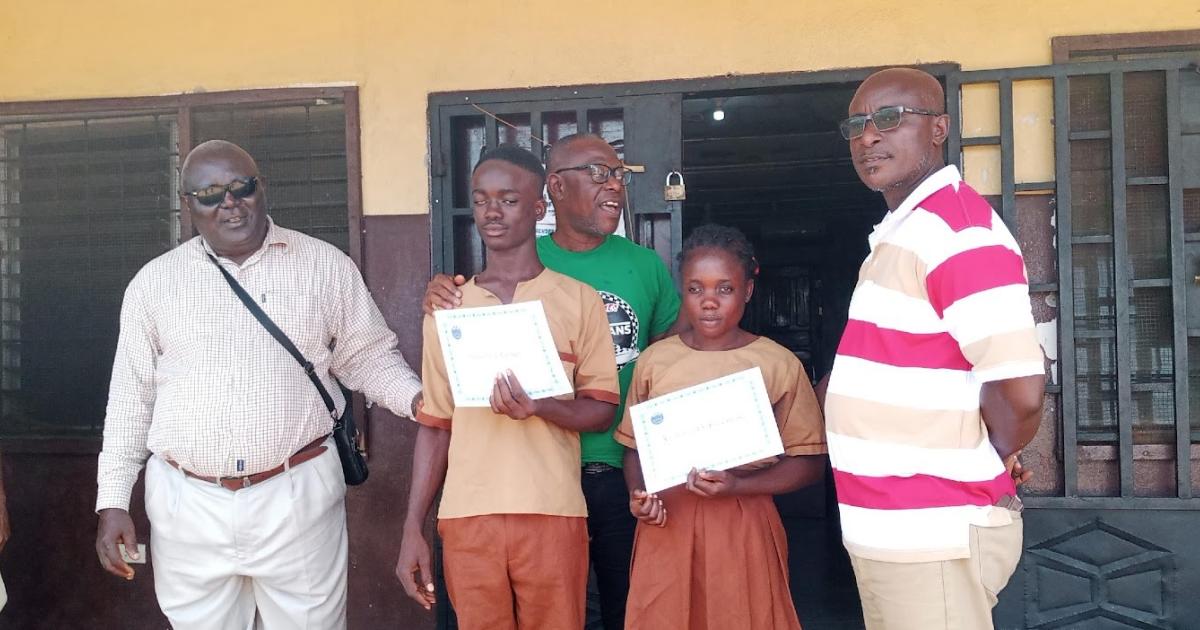 Five visually impaired students from the Christian Association of the Blind, School for the Blind and United Blind Association of Liberia have been awarded scholarships to further their educational goals.

The scholarships, worth US$2,455, will cover tuition fees and other benefits for selected students at their respective schools for the 2022-2023 academic year. Based on the academic performance of the students, the scholarship is subject to extension.

The scholarships were provided by Dr. Ben A. Roberts Foundation Incorporated, a US-registered institution that aims to support visually impaired students.

Uniforms, notebooks, braille papers, t-shirts, personal hygiene supplies, rice and many other items are covered by the bursaries.

The Dr. Ben A. Roberts Foundation provides scholarships, training and resources to the visually impaired less fortunate in Liberia through private and public donations, according to the institution’s authorities.

This foundation was founded by the children of the late Dr. Ben A. Roberts, in remembrance of their father’s work to give back to visually impaired students.

Dr. Roberts was an educator and civil servant in various capacities in Liberia. He was formerly the head of the National Social Security and Welfare Cooperation (NASSCORP), as well as a former president of the University of Liberia.

Terence B. Krangar, scholarship program coordinator and educational consultant for the Foundation, said that before Dr. Roberts died in 2020, he had lost his sight, which gave his children a desire to support the visually impaired.

“My wife and her siblings decided to start this foundation and give back to Liberia, including helping the blind or visually impaired,” Krangar said.

Currently, Krangar said, the foundation is funded by his wife, siblings and a few friends to help with the goal.

“Our goal is to continue helping the visually impaired in Liberia, especially through education. Our initial plan is to sponsor five students,” Krangar said.

According to Krangar, the foundation has worked with a group in Liberia to help vets, focusing on academic and need-based grants.

Krangar, who has more than 20 years of classroom experience in Liberia and the United States, said the foundation plans to increase the number of beneficiaries.

Meanwhile, Krangar provided a certificate to each recipient and urged them to take advantage of the opportunity given to them.

The Executive Director of the Christian Association of the Blind Liberia (CAB), Beyan Kota, expressed his gratitude to Krangar and the entire leadership of the foundation for their support.

“Dr Roberts is sorely missed as he was always a gentleman who kept his plea. He advocated for us to go places we couldn’t go and represented us at the Truth and Reconciliation Conference in Gbarnga, Bong County,” Kota said.

Kota praised Krangar and the entire family for establishing the Foundation in honor of Dr. Roberts, saying, “We all need to keep this foundation alive.”

Kota said the administration is committed to providing quality education to students that enables them to succeed in society at large.

“No blind person has come here and returned to their community in the same way. When they came discouraged, they came back with hope. When they arrive uneducated, we provide them with an education, and that is a task we are committed to doing,” he said.

According to Kota, in Liberia, the Christian Association of the Blind (CAB) is a resource center that now provides visually impaired people with education and skills to function in the wider society.

“The school used to have over 80 students before the Ebola outbreak, but currently has just over 40 students,” he said.

According to Kota, when Dr. Roberts lost his sight, he was trained at CAB in the use of Braille and others.

The principal of the school for the blind, Jackson Suah, expressed his joy and called on the foundation to increase the number of beneficiaries of the scholarship program.