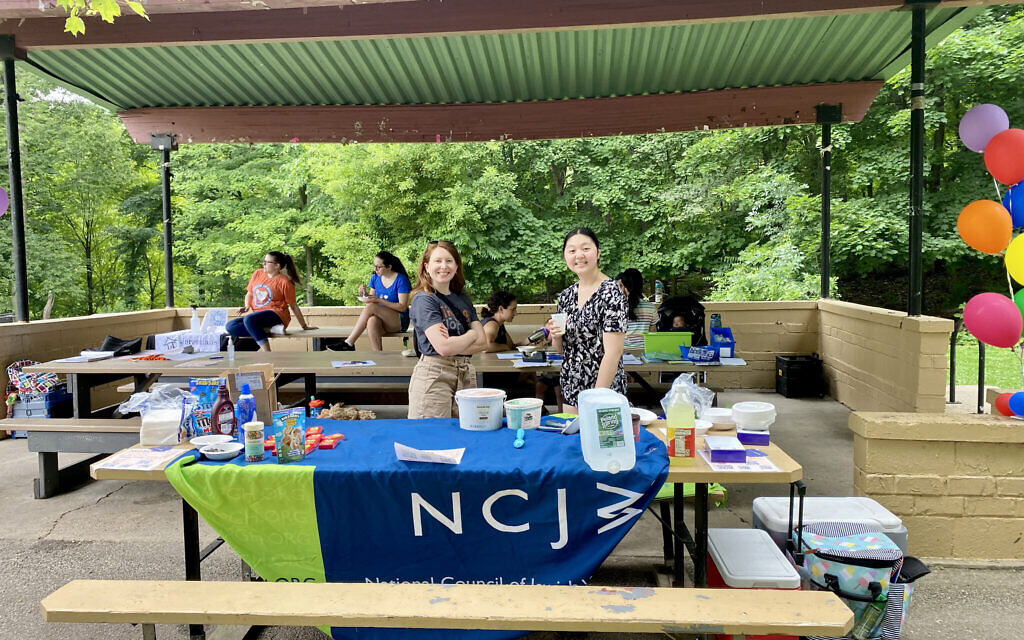 For more than 125 years, the National Council of Jewish Women of Pittsburgh has been advocating for the rights of women, children and families. Last month, the nonprofit took another step forward by naming Marissa Fogel its executive director and Megan Rose its senior director of community engagement.

Both Fogel and Rose have a passion for NCJW, as well as building their community through nonprofit work. Prior to coming to NJCW, Fogel developed 412 Food Rescue’s Good Food Project and Rose spent time at United Way. In fact, it was through her work with United Way that NCJW first appeared on Rose’s radar.

“The Center for Women project (now known as MomsWork, which helps women achieve financial well-being) was part of a larger grant I oversaw under the United for Women initiative. “, said Rose. “That’s when I heard about free financial coaching for women.”

Rose, who has a background in family law and works with survivors of domestic abuse, said she was intrigued by the program.

“I know how important financial independence is for women,” she said.

For Fogel, the opportunity to lead the NCJW was a return to his family roots.

“I come from a family of Jewish women involved in social action,” she said. “In many ways, I was raised in this culture of participation and collaboration and contributing time, care and compassion. It’s in my blood.

Mobilize young leaders
Fogel’s goals, she said, include breaking out of the siled work organization into a more collaborative space. She is also interested in engaging young leaders.

“I think there’s a wonderful opportunity to involve more people from the community in the work we do,” she said. “I think that speaks to a lot of people, especially millennials and Gen Z.”

She hopes leaders with proven experience and institutional knowledge will work with the next generation to create opportunities for them to feel fulfilled working with NCJW, she said.

The organization, Rose said, created a task force last summer and looked at several issues. For example, how can NCJW Pittsburgh modify its service work to change systems that perpetuate racial, gender, and other disparities and inequalities? How does it move from a transactional model to a relational model of community service and alliance? Should its work be guided and informed by programs and projects or key questions? What is the role of volunteerism and direct service in today’s world? And what is the potential for the NCJW to build on its current strength and capacity?

The process included examining issues such as the nature of community alliance and the link between community service and social change. The organization also evaluated all of its existing programs and projects.

One example of the change inspired by the assessment, Rose said, is the transition from the annual back-to-school event to the Kids Community Closet program, which provides children with year-round essential clothing in their communities.

Fogel noted that this type of project-based work is better focused on the communities it impacts. She hopes young leaders will engage with the organization when they see the value of their work in the regions it directly impacts.

Shifting ground
Fogel and Rose not only assumed their leadership positions at NCJW as the organization entered a period of self-evaluation, but they came on board at a time when the political landscape had changed. Only a few months ago, many people assumed that abortion would remain a protected right across the country and that the fight for marriage equality was over.

“One of the things I appreciate most about NCJW Pittsburgh,” Rose said, “is that we are nimble enough to respond to emerging conditions or challenges that our community faces. Reproductive justice does not exception to this.

The Supreme Court’s Dobbs decision has left many organizations operating with a sense of urgency, working to discern where they can best support access to reproductive health care and help educate community members, it said. -she adds.

NCJW Pittsburgh, Fogel said, operates at the intersection of project-based and issue-based work, and it’s important for the organization to engage young leaders speaking out about issues like reproductive health on the networks. social.

Think national, act local
NCJW Pittsburgh is the local chapter of a national organization, and there are benefits to that structure, Rose said.

There is an “opportunity to connect with other chapters to find out what works as they establish their particular path when it comes to reproductive justice,” she said, adding that she plans to reach out to NCJW LA to discuss “a nice program around guaranteed income”. .”

The director of community engagement said the local chapter can borrow ideas and seek support from other chapters, in addition to ensuring that some of its priorities flow from the national NCJW.

“I would say it makes both macro and micro possible,” she said.

The goal is to keep NCJW Pittsburgh’s mission at the center of their work, Fogel said.

“What that looks like for us is finding the intersectionality between problem-based work and project-based work,” she said. “For example, our children’s rooms in the courts are an example of the type of program and support system that brings visibility to child care issues, or the lack of paid child care, for families. who work.”

Fogel said the program can provide an opportunity to talk about pay equity and connect it to voting rights issues.

“We can take an issue, focus it at the community level and start working with stakeholders,” she said.

Jewish principles
NCJW’s mission may resemble that of many other women’s rights groups, Fogel said, but NCJW’s work is filtered through a Jewish lens.

“The basis of tikkun olam and the use of the idea of ​​fixing the world constantly centers us on issues such as race, class, gender, sexuality, ability, immigration status”, a- she declared. “For us, this is the main driver. Tikkun olam is what centers us in this work.

NCJW Pittsburgh is co-sponsoring the Just Film series September 22 at Chatham University. The film “The Janes” will be screened followed by a round table. PJC

David Rullo can be contacted at [email protected]