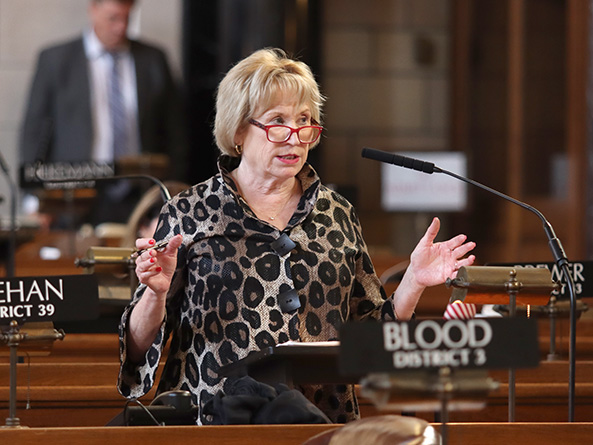 Senators rejected a second attempt to advance a General Record bill that would create a tax credit scholarship program for Nebraska private school students after a Jan. 12 motion for closure failed.

LB364, presented by Elkhorn Senator Lou Ann Linehan, fell four votes short of a successful first-round closure motion last session. It returned to the agenda this year after Linehan named it his priority bill for the 2022 session.

She said the proposal would give 1,500 children the option of attending a private school that better meets their needs, a choice not available to many low-income families in Nebraska.

The bill would allow individuals, flow-through entities, estates, trusts and corporations to claim a non-refundable tax credit of up to 50% of their state income tax on contributions they pay to non-profit organizations that provide scholarships for students to attend a private school.

Only residents of Nebraska would be eligible for the scholarships, which could be used to pay for tuition and fees at an eligible private elementary or secondary school in Nebraska.

Students would be eligible for scholarships if, among other conditions, they are a dependent member of a household whose gross income does not exceed the eligibility criteria for discounted meals under the National School Meals Scheme.

As introduced, LB364 would allow the Department of State Revenue to issue $10 million in credits in 2022. After that, if at least 90% of a given year’s credits are claimed, the annual limit would increase by 25%.

One waiting Revenue Committee rather, the amendment would limit the total amount of appropriations available each year to $5 million and omit the mechanism for allowing appropriations to increase each year.

Under his proposal, taxpayers who make an eligible financial contribution to certain child care and early childhood education programs in Nebraska could claim a non-refundable tax credit equal to a portion of the contribution.

“We can’t keep doing what we’re doing right now,” he said. “Let’s try something else.”

A pending Wayne Amendment would end the credits after 10 years, which he says is enough to determine whether the scholarships have a positive effect on the students who receive them.

Omaha Sen. Terrell McKinney said he had changed his mind about LB364 since last year and now supports it. He said private schools could provide an alternative to public schools in North Omaha that are failing some students.

Senator Megan Hunt of Omaha opposed the bill, saying it would not address issues, including poverty and housing insecurity, that lead to the achievement gap.

She said the proposal would use public funds to indirectly benefit private schools that are allowed to discriminate against students and teachers based on their gender identity, sexual orientation and other factors.

Hunt introduced an amendment last session that would prohibit a scholarship-granting organization from discriminating against students on the basis of race, color, religion, national origin, ancestry, citizenship status, sex, sexual orientation, gender identity, disability, or special education status. He failed on January 12 on a vote of 17-26.

He proposed an amendment that would require schools that enroll students who receive tax credit scholarships to abide by the same budget requirements that apply to public school districts.

“If we’re going to provide … that kind of incentive,” Morfeld said, “then those institutions should follow the same rules and have the same level of transparency as any other institution that receives that kind of public benefit. ”

Several senators questioned why the proposed credit should provide donors with a greater tax benefit, dollar for dollar, than other charitable donations, which qualify for a tax deduction calculated using the donor.

After eight hours of debate on the general record, Linehan tabled a motion to invoke closure, which would end debate and force a vote on LB364 and all pending amendments.

The motion failed on a vote of 28-14. Thirty-three votes were needed. A failed motion for closure results in the cessation of debate on a proposal for the day. It is unlikely that the bill will be put back on the agenda this session.

Council plans to cut £37,000 a year from an adoption agency and bring services in-house