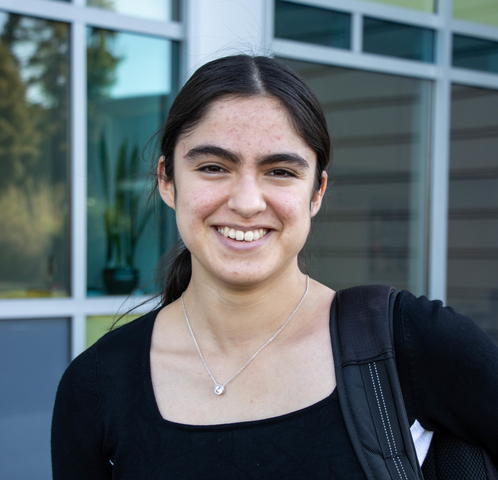 When the Stanislaus State University committee interviewed candidates for the Presidential Central Valley First-Generation Scholars program, their eyes must have widened as they listened to freshman Angeles Ramirez speak.

“I see a lot of people graduating here or going to Modesto Junior College and moving to the Bay Area and never coming back,” Ramirez said. “A lot of my doctors and nurses, even my eye doctor were from the Bay Area, but they were from here, and I thought that was really cool.”

The Ceres native portrays the recipient of State President Stanislaus’ Central Valley First Generation Scholarship. The award is the first scholarship program of its kind in the California State University system, in that it is dedicated to students from a specific region. It pays for tuition, fees, books, and a laptop and is awarded for four years for freshmen and two years for transfer students who plan to stay in the area after graduation.

Not only is she continuing her education at Stan State, Ramirez hopes to launch her career in the area.

Torn between wanting to become a biology teacher or an optometrist, Ramirez is certain to stay close to her family roots.

“My optometrist, since I was very young, probably 11 years old, told me that he would guide me and he said to me, ‘You have to come back to the central valley.’ It stuck with me,” Ramirez said.

The Central Valley, where her father was born and raised and where she has around 40 cousins, is the only place she has ever called home. Visits to her maternal grandmother in Guadalajara exposed her to life in the big cities, but Ramirez prefers the quieter valley.

“It’s not as fast as some cities in the Bay Area, and that’s good,” said Ramirez, who visited friends who attend UC Berkeley. “It lets you savor a lot of what’s going on. It’s the place that made you who you were when you started your studies. I think it’s really important to remember that.

That and hard work made Ramirez a scholar at Ceres High School where she took advanced placement classes and won the school’s academic decathlon team scholarship as the most accomplished member. illustrated the spirit of the team.

She has earned other scholarships, but the President’s Central Valley First Generation Scholarship is particularly special.

“It’s the fact that he has a mission behind him, and that’s something I’ve never seen before. That’s what sets it apart. This scholarship wants to help us get our education, and maybe we go to the Bay Area, but they want us to bring back the knowledge and contribute to the community that has helped us and continues to help us now.

The scholarship’s financial reward doesn’t mean Ramirez plans to quit her job as an extra teaching manager for a physics class, which she attends, takes notes and meets with students who might need help. She is not enrolled in the course. She received credit for statistics by passing the AP exam in high school.

This work and this tutoring, which she loves, are part of her desire to fully experience campus life.

She took face-to-face classes in the fall and this semester is “on campus all the time.” She participated in activities sponsored by Associated Students, Inc.

“I coach my friends,” Ramirez said. “It made me feel more comfortable when we returned to campus in the fall. We were painting on small canvases and there was a pumpkin carving contest. We were able to watch the snacks of the world and they gave us packaged snacks. There was a team building in the Quad with a water balloon activity. I didn’t participate, because I didn’t find out soon enough, but I would have.

“There are certainly a lot of things that Stan State does, and the students do too, to make us feel welcome. Even though we don’t know each other very well yet, I feel there is a community that makes me feel welcome.