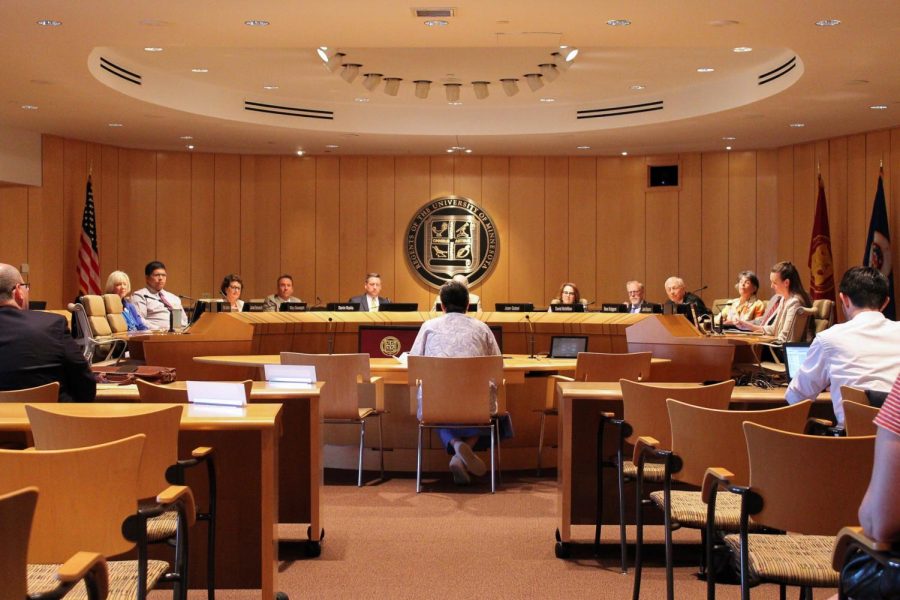 The University of Minnesota board of trustees discussed new scholarship opportunities and plans for two academic health science projects at their meeting on Friday.

University President Joan Gabel also announced changes to the university’s requirements for indoor masks. Starting March 21, masks will only be required in classrooms and teaching labs, health care facilities, public transportation, and in settings where masks are required due to unsafe conditions.

The University is requesting $60 million for student financial support through a supplementary budget request to the state legislature. The University has requested a total of $935.6 million from the state this year.

If the request is approved by the state legislature, the $60 million will be used to expand two student scholarship opportunities, said Julie Tonneson, the university’s vice president of finance and operations and chief budget officer. , during a meeting.

Thirty million dollars will go towards improving the U Promise scholarship program. The current program allows students to receive scholarships if their family household income is $120,000 or less.

The new expansion would target students from middle-income families, allowing students from families earning up to $160,000 a year to receive scholarships.

The University recently expanded the scholarship with the Promise Plus program, which provides tuition-free education to families earning $50,000 or less. The University also announced in November that it would offer full tuition scholarships to students from Minnesota Tribal Nations whose families earn less than $75,000.

“Clearly, attention to our middle-income students must be a priority for our financial aid strategies going forward,” said Robert McMaster, Vice Provost and Dean of Undergraduate Education, during a meeting.

The Greater Minnesota Scholarship Program would require the remaining $30 million from the University’s supplemental budget request. The program would provide scholarships to every Minnesota resident entering their freshman year at campuses in Duluth, Morris, Rochester or Crookston.

Students would receive $4,000 to $5,000 in their first year and an additional $1,000 to $2,000 in the following three years. The goal is to attract students to these four campuses and increase retention, McMaster said.

Although the council has generally supported these budget demands, some regents have said they are concerned that creating more scholarships may be the best long-term solution to reducing student debt.

“I understand that we are asking for this in the supplementary budget,” Regent Darrin Rosha said at the meeting. “I just don’t know if it has nearly the impact it would have if we applied this to reduce the tuition burden…and hopefully in the future that’s where we get let’s focus.”

If the University used $30 million of that funding to reduce tuition, rather than increase scholarships, the current tuition rate would drop by about 7%, according to Tonneson.

“Low tuition is the best form of financial aid,” Regent Steve Sviggum said at the meeting. “I hope we get our legislative request, but please understand that nothing is free…and our tuition that we charge at the University of Minnesota could be 7% lower for all students.”

The board discussed creating an academic health center in the Duluth Medical District and a health discovery center on the Twin Cities campus. The board approved both projects in the University’s revised state capital application in December, but they are still pending funding approval by the state legislature.

Both projects are designed to expand medical educational opportunities at the University and provide better medical care to rural Minnesota, said Jakub Tolar, vice president of clinical affairs and dean of the medical school.

“These projects aim to transform innovative new spaces for classrooms, laboratories, research [and] spaces that allow us to cultivate talent and ultimately expand the University of Minnesota’s ability to provide world-class health care to all Minnesotans,” said Myron Frans, Vice President Director of Finance and Operations, during the meeting.

The Duluth University Health Center would be located near St. Luke’s Hospital and Essentia Health and would include new spaces for classrooms and specialty labs, Tolar said. The estimated total cost would be $18 million.

If funding is approved in the 2022 state legislative session, the project would take nearly four years to complete.

The Health Discovery Hub on the Twin Cities campus will focus on facilitating rural clinical trials and integrating neuroscience research and clinical care.

The proposal includes the construction of a new building to complete the hub. The new center will be built near the Center for Health Sciences Education. The total cost is estimated at $252 million.

If the state legislature approves the funding, the design of the hub would take about three and a half years.

“This is a once-in-a-lifetime opportunity to really make a difference,” Regent Ruth Johnson said at the meeting. “It’s a really important initiative that I strongly support.”

The Regents said they supported these proposals and believed the state would approve such funding for the university.

“I think the legislature should all support that,” Regent Doug Huebsch said at the meeting. “I don’t know why they wouldn’t. That’s the main thing they should be concerned about, the health and safety of citizens.